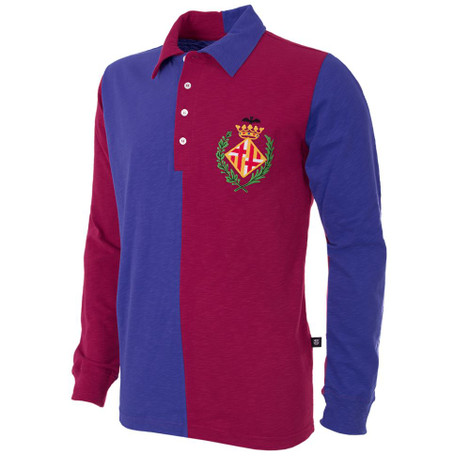 FC Barcelona were formed in 1899 by Swiss businessman Hans Kamper after he had visited the city & fallen in love with it. The first side to take to the pitch was a cosmopolitan mix of men who had responded to a newspaper advert & the club's colours were inspired by FC Basel, who Kamper had played for in his younger days.

This stunning retro shirt lets you pull on an exact replica of the very first ever Barcelona shirt. It comes with a matching design, the exact crest that was used at the time & features premium quality cotton for a feel that closely matches what that original XI would have pulled on.

This retro shirt is officially licensed by Barcelona & comes in its very own presentation box. This makes it an ideal gift for any fan of the Catalan club.

• Design that matches the original

• Comes in a presentation box