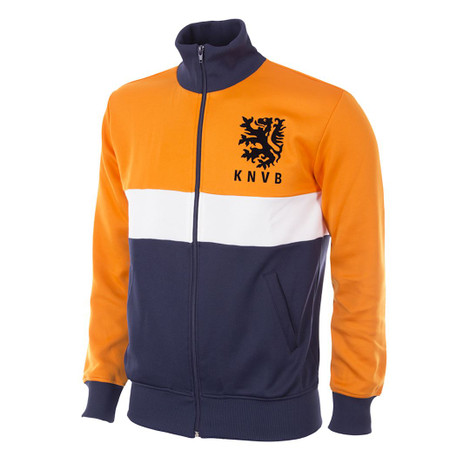 Despite having the likes of Ruud Gullit & Ronald Koeman playing for them at the time, the Dutch actually found themselves in a bit of a footballing limbo as they failed to qualify for both the 1982 World Cup & then the 1984 European Championship.

Their failure to qualify for the Euros was mired in much controversy however, as Spain needed a huge 11 goal swing against Malta to overtake Holland in the group. A 12-1 victory for Spain still leaves a bad taste in the mouths of Dutch fans to this day.

Despite the surrounding controversy, this retro tracksuit top has been stunningly recreated by COPA & is arguably one of the nicest looking jackets you're ever likely to lay eyes on. Each one is crafted under an official licence from the Dutch FA.

• Comes in a Holland-branded presentation box