It’s one of our favourite retro football shirts, the East Germany 1974 World Cup Shirt and of course there’s a great story to accompany this classic football shirt. 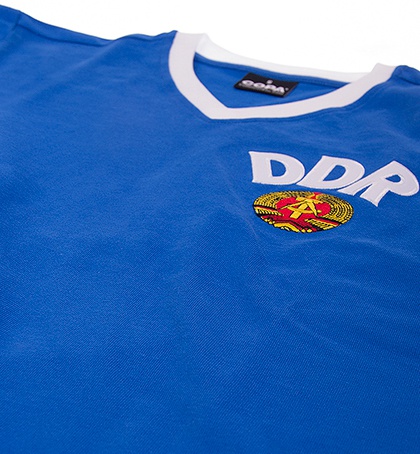 As the Cold War in Europe intensified in the early to mid-70s, the focus of East v West shifted focus to international football as West Germany played East Germany in the 1974 World Cup. The tournament was of course hosted in West Germany and the stakes couldn’t have been higher. Going into the tournament as favourites and with an East German born coach determined to validate his earlier defection, it was unthinkable for the West German population to see their team lose such an important match. This wasn’t just about sport or football; ideology was at stake.

This was to be the first time the two senior national German teams had met with the East Germans having been admitted to FIFA only as recently as 1952. It’s fair to say that the two countries were gripped in the run up to the big match.

West Germany, perhaps burdened by their favourites tag, started very slowly narrowly beating Chile 1-0 with a performance roundly criticised by fans and pundits alike. Qualification for the second round was achieved by defeating Australia, one of the weakest teams in the tournament 3-0. The score line did little to deflect the view that this team was not firing on all cylinders. The onset of the tournament had been beset by many squads disputing bonus and payments with their own football associations. West Germany were no different and indeed agreed a bonus payment with the West German FA at the 11th hour after coach Helmut Schön had threatened to send his players home and play a second fiddle squad.

East Germany’s first two group games were no more emphatic. A 2-0 defeat of Australia & an insipid 1-1 draw against Chile meant their qualification for round 2 hung in the balance. However a 0-0 draw between Chile & Australia played a few hours before the main attraction meant that both German teams would progress to the next round. The scene was set in the Volksparkstadion in Hamburg with 60,000 fans packed in. Fully 58,000 of them cheering on the West Germans against a handpicked contingent of vetted East German Communist Party members numbering only 2000.

It would seem though that West Germany’s relatively poor standard of play thus far in the tournament would continue. Without grabbing the game by the scruff of the neck as their fans demanded, the West Germans flattered to deceive with only a handful of chance coming their way. It was the East Germans who took the lead in the 77th minute with Jurgen Sparwasser latching on to a pass and scoring the matches only goal. The East Germans topped the group and cynics will say that the West Germans played for a defeat to avoid being placed in a 2nd Round Group alongside Brazil, Holland & Argentina.

Of course, the rest as they say is history. West Germany went on to win what was their 2nd World Cup and that monumental meeting with the two Germanys turned out to be their only ever competitive match before national reunification following the collapse of the Eastern Bloc and the tearing down of the Berlin Wall.